The Star Awards honoured the best in Singapore’s Chinese television industry Sunday, as the stars arrived at the Marina Bay Sands resplendent in their Sunday best. From flowy gowns to confusing bustiers, here is our take on who scored big on the red carpet and who should have packed their bags and fled the scene of crime.

Rui En was every bit the princess in this plum Dior gown, with a sheer-panel top, a bodice fitted to her body and a skirt that balloons out with just the right amount of flounce. She looked amazing as she walked down the red carpet, with her dress gliding along. Here is why Rui En is always a winner in the style books: she doesn’t try too hard but knows when to be stylish. Take her beauty look, for example: a high bun keeps her face

Caldecott ‘princess’ Rui En also scooped an award in the Top 10 Most Popular Female Artistes category, adding it to her yearly collection. In her Best Actress speech, she thanked her fans for their unwavering support, flashing a rare dimpled smile.

Since airing on various Chinese websites, Singaporean drama “C.L.I.F 2”, witnessed an increase in viewership in mainland China and subsequently broke the record on various websites.

As reported on Asianpopnews website, the drama, starring Qi Yuwu, Li Nanxing, Thomas Ong, Rui En and Joanne Peh, is a sequel to the “C.L.I.F” series that was aired back in 2011.

It became the second most watched drama in Singapore that year after receiving rave reviews for its realistic depiction of the struggles faced by police officers as well as the challenges they faced in their personal lives.

Meanwhile, the sequel added more twists into the criminal cases, and shed more light into the investigation of crime scenes. 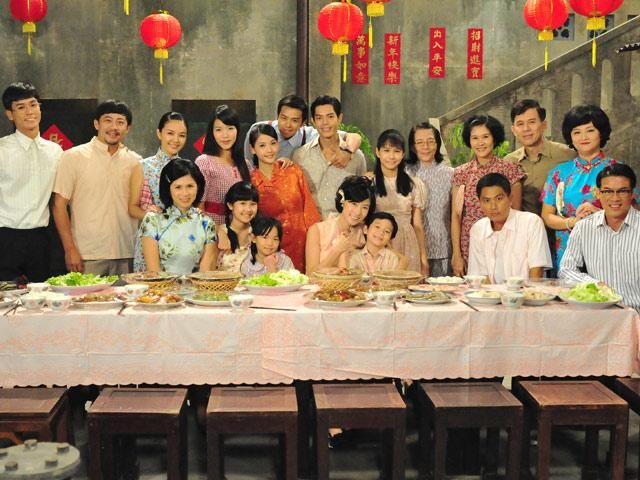 Joyful start for “Joys of Life”

“Joys of Life” is a period drama comprising of the nostalgic feel of 60s to 70s. The story revolves around several families who live on the same street; Huaxiang Street, including some youths who dream of fame.

Rui En said she was very glad to see the positive feedback from the viewers. She said the drama is a result of the hard work put in by every member of the crew and cast as a team.

Joys of Life 花样人间 is now airing on Channel 8, Weekdays at 9pm.

The many crying scenes in With You left her crazy, scared and sick

For the first time in her career, Rui En cried through many of her scenes in upcoming Channel 8 drama With You. If she wasn’t sobbing, chances are her character was still at least grieving.

And it took its toll.

The actress known for her frosty front revealed that filming for the show put her emotions into tailspin, creating an-almost split personality and made her sick.

After her wacky turn in the Chinese New Year drama Happy Family, Rui En will soon be seen as a mother-of-one who loses her husband (played by Chen Hanwei) to a road accident in With You.

In an interview with xinmsn, she said having to cry and maintain a sense of sorrow throughout much of the filming was exhausting and made her sick. The method thespian, who said she has never lost anyone dear to her, used shouting and wailing to get herself into character and even discussed extensively with the director how to refrain from bawling pointlessly.

“That feeling was simply too scary,” the ice queen said about reaching reel breaking point.

“I’ve never been like that. Also, after work I had to ensure I stopped being sad. It might not be very healthy,” she considered seriously.

Rui En played the gullible, good-natured Yang Xiaodong in Happy Family and has just started filming for cop drama Unriddle, in which she stars as a tough anti-hero, Hu Xiaoman.

With just about a month of rest in among the three vastly different roles, the 29-year-old reckons she’s almost schizophrenic, “Now I feel I’m going crazy! Physically I’m feeling a little tired too.”

The actress counts Academy Award-winning French diva Marion Cotillard as the person she looks up to. Although she feels she might never reach the skill level of the 34-year-old star of La Vie en Rose, Taxi and Nine, her With You co-stars might not agree.

At the press conference on Tuesday, Asian screen king Adrian Pang called her abilities “scary”, while Hanwei labeled her a “crying goddess”.

Veteran actor Chen Shucheng even named her in the company of acclaimed local actresses Huang Biren and Ivy Lee, all of whom, he said, could cry “beautifully” and reflect the demands of the scenes’ context.