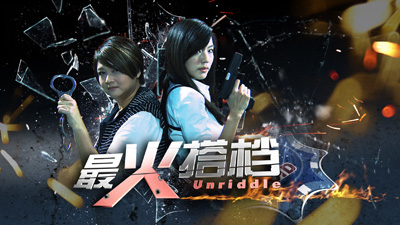 Xiaoman receives a tip-off that a human-trafficking ring will be congregating at a particular location. She activates her team for an ambush. However, when they arrive at the location, no one is there. Upon further investigation, Xiaoman finds out that her colleague and good friend, Zhang Yuze had previously been checking up on her leads. Yuze denies doing so when confronted by Xiaoman.

Yuze is unable to tell Xiaoman the truth of the matter. For the past 5 years, he has been setting the stage together with his informant, Lin Zhengyi, to bust the human trafficking ring led by Shan Fan. In order to round up all members of the human trafficking ring at one swoop, Yuze and Zhengyi cannot run the risk of alerting them that the police are keeping a lookout. As such, they had to arrange for Xiaoman’s target to slip away unnoticed.

Meanwhile, a kidnapping has occurred. When the team arrives at the scene where the kidnapping took place, they discover the suspect had left behind his fingerprints. Upon checking with the police database, the prints are found to belong to Cui Xiuling, a woman who went missing and was presumed dead 6 months ago.

Investigations show that the kidnapped victim had contacts with a young woman before his abduction took place. The female kidnapper had demanded a ransom but managed to escape the ambush laid by the police. She did not manage to obtain the ransom and also did not release the kidnap victim.

Xiuling’s father, Cui Haodong has been searching for her for the past 6 months. He refuses to believe that Xiuling was killed in the accident as her body was never recovered.

Shan Fan finally fixed a date and location to meet up with foreign human traffickers for a transaction to be executed. Yuze and Zhengyi see this as a great opportunity to bust two international human trafficking rings at the same time. Yuze sets up the ambush at the location and works with Zhengyi who is working undercover. In the midst of the operation, Zhengyi is knocked unconscious. When she comes to, she realizes that both Yuze and Shan Fan have disappeared. The money involved in the trafficking transaction is similarly gone. Speculation is rife that Yuze was tempted by the large sum of money and helped Shan Fan to escape.

Zhengyi finds out that Xiaoman is investigation Cui Xiuling’s kidnapping. She recalls seeing a young woman who resembled Xiuling amongst the women who were being sold by the human trafficking ring for prostitution. She teams up with Xiaoman to conduct further investigations. If indeed that young woman is Xiuling, she should have been under the control of the human traffickers at that point. How, then, could she be involved in the kidnapping case?

The mystery thickened. Henceforth, Yuze seemed to have vanished into the air.

Cao Pin and Meiyue’s son, Xiaofu, has been missing for a week. An intensive search by the police has been in vain. Initially, Xiaofu’s disappearance was believed to be a one-off case. However, many parents gradually come forward to report cases of missing children…

Xiaoman discovers that the children who have gone missing are all boys aged between 5 to 6 years old. There seems to be no connection or relationship between the boys who have disappeared.

During an exhibition, one of the missing boys suddenly appears, mysteriously dressed up as a doll. When Xiaoman questions him on how he went missing, the boy is incoherent and unable to provide a clear statement.

At this point, a psychic claims to be able to predict where the boys would appear. It was as if he possessed supernatural powers.

When she checks up on the psychic, she finds Zhengyi there. Both Zhengyi and Xiaoman feel that the psychic has something to do with the boys’ disappearance. Perhaps, he was the one who abducted the boys and then created fraud predictions to draw attention to himself. Zhengyi pretends to believe in the psychic but works secretly to uncover the psychic’s real identity. Unfortunately, when the leads seem to point to the psychic as the main suspect, he is found dead.

Not long after, the police find the decomposed body of a boy dressed up as a doll in a heavily forested area. Autopsy results show that the boy is Xiaofu.

Xiaoman deduces that the culprit is a man with doll fetishes, who dresses boys up as dolls. Perhaps the culprit had been forced to dress in this manner as a child, which resulted in him venting his anger in this way, as a form of vengeance.

Through Zhengyi’s investigations on the side, she found Yu Zhenbang to be most suspicious. Further, she discovers that he was secretly in touch with Meiyue, and is deeply in love with her.

Is Yu Zhenbang the one who abducted the children and who killed Xiaofu? The truth does not appear to be so simple.

When the body of Huang Shuzhen is discovered, no one believes that she committed suicide even though circumstantial evidence points that way. The police do not rule out her live-in boyfriend, Wu Guosheng, as a suspect even though he has an alibi. Investigations reveal that Guosheng was once Yuze’s team mate on the police force. Both of them cracked several big cases together. However, after Guosheng’s first wife passed away from a terminal illness, he lost his spirit and left the force.

Through the statements of eye-witnesses, Xiaoman realizes that Yuze had been at the scene of crime! Guosheng is convinced that Yuze had killed his girlfriend and decides to seek revenge!

At this time, a missing young woman, Feng Liqi, falls to her death. Coincidentally, Xiaoman and Zhengyi were at the crime scene and had seen a mysterious gun-carrying man around. This case was thus classified as murder.

From the files of the missing women, the duo realizes that all victims possessed some physical resemblance. They all had a “beauty mole”. Annie, a girl staying with Zhengyi possesses the same resemblance and is persuaded by Zhengyi to become her bait, to lure the prime suspect, Zhongxiao out.

The duo succeed in trapping Zhongxiao. Unfortunately, Annie also disappears without a trace. Zhongxiao vehemently denies his involvement and refuses to reveal where Annie is held captive.

Through their investigations, Xiaoman and Zhengyi discover that when Zhongxiao was 14 years old, he had witnessed his tutor fall to her death. His tutor possessed the same resemblance to the murdered women. Xiaoman deduces that Zhongxiao had been madly in love with this tutor, but wasn’t able to be together with her. An indelible scar was left in his heart when he witnessed her death, and he had kidnapped the girls as her substitutes. This was his way of remembering his tutor.

Xiaoman decides to use reverse psychology to make Zhongxiao tell the truth. Until then, Annie’s life remains in danger.

Wu Guosheng resurfaces again only to be shot dead by a mysterious gunman. Forensic examination of the bullet shows that it came from Yuze’s gun. Crime scene investigations also reveal Yuze’s fingerprints.

Xiaoman knows that Guosheng contacted her superior, Andrew Kwan, before his death. It is later revealed that 15 years ago, Andrew Kwan was also teammates with Yuze. What is the connection between this group of teammates? Zhengyi and Xiaoman hence start to investigate this case in the hope that they might find Yuze.

Xu Zhirong, a bodyguard, was killed in line of duty. Xiaoman happened to be at the scene of crime and had seen two assailants. This proved that Yuze had a partner in crime. Who was he? Investigations showed that Zhirong was an ex-police officer and had been Yuze’s team mate 15 years ago.

According to eye-witness accounts, Zhirong had met someone before his death. This person turned out to be Andrew Kwan. Xiaoman questions Andrew about his motive for meeting Zhirong and is told that it was merely a gathering to catch up with old friends. Xiaoman suspects that Andrew is hiding something and could be Zhirong’s murderer. Andrew denies and finally reveals a secret he has kept for the past 15 years.

A woman claiming to be Zhang Xiumei approaches Zhengyi to help her locate another woman by the name of Zhang Meilin. Zhengyi’s search leads her to a woman who is likewise called “Zhang Xiumei”. This makes her confused. Who is the real Zhang Xiumei?

A woman by the name of Lizhen gets attacked and admitted into hospital. From the traces of blood at the crime scene, it is discovered that Zheng Xiumei’s DNA had belonged to Zhang Meilin on the records. A warrant is issued to arrest Meilin. Upon interrogation, it is revealed that Meilin and Xiumei had swapped their identities 1 year ago.

The two Meilins got to know each other during a backpacking trip and had exchanged identities on a whim. Xiumei was disfigured following an accident and had fallen into a coma. When she came to at the hospital, Meilin suddenly told the doctors that she was Zhang Xiumei.

Henceforth, Zhang Meilin took on Zhang Xiumei’s identity and returned to Xiumei’s hometown to care for Xiumei’s blind father. Xiumei’s father died not long after and left considerable wealth to Meilin, who thought she could go on living as Zhang Xiumei. However, Zhang Xiumei appears out of the blue and wants her identity back…

When Xiaoman and Zhengyi look into the 15 year old case, they find out that Yuze, Guosheng, Zhirong, Chai Dexing and Andrew were once teammates in the police force. Dexing was killed in the course of duty 15 years ago whilst the rest of the team members have either disappeared or been murdered.

From the traces of evidence they find, Xiaoman and Zhengyi pieced together what happened 15 years ago.

15 years ago, Yuze and his team mates were on a case involving drug smuggling. The drug lord managed to escape the police, but left a huge sum of money behind. At that point in time, Guosheng pleaded with his team mates to let him use the money for his wife’s medical treatment. His wife was terminally ill. Yuze decided to let Guosheng use the ill-gotten money, but this was met with Dexing’s vehement protests. The latter threatened to report the matter.

It was later agreed that the money be temporarily hidden, and to be used when the matter has blown over. The money went missing later, and Yuze found out that Dexing had visited the place where the loot was hidden. The rest of the team started to suspect that Dexing had taken the money.

One month later, Yuze and the rest found the drug lord’s whereabouts and whilst pursuing him, Zhirong gunned Dexing down, making it look like an accident. Yuze and the rest fabricated stories about Dexing dying in line of duty in their attempt to hide the truth.

The team later went their separate ways. Guosheng and Zhirong left the Force, whereas Yuze and Andrew remained.

Xiaoman and Zhengyi refuse to believe that Yuze was the culprit. They continue to investigate, but are unable to find Yuze, who seems to continue on his crime spree in the shadows.

Xiaoman comes to know of her father’s long-hidden secret. Perhaps, she would rather not uncover this ugly truth… Her father had disappeared all those years back. Where did he go?

The case was committed 15 years ago, and the accounts from the various parties varied. In the nick of time, Zhengyi finds Yuze. The 15-year secret is finally coming to light. What is the truth?