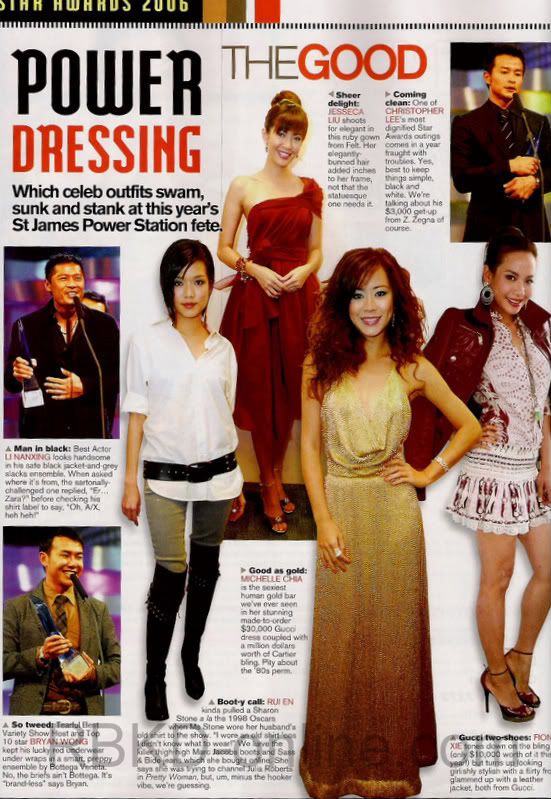 Five fresh faces stood out at Sunday’s Star Awards, but can one of them become the next Zoe or Fann?

GASPS of surprise could be heard when the words “Quan Yifeng” rolled off presenter Zax Wang’s tongue on Sunday night.
Quan, an eloquent show host, was the last name on the coveted Top 10 Most Popular Female Artistes list at the annual MediaCorp Star Awards ceremony.
No, the artistes and fans gathered at St James Power Station were not surprised that the glib-tongued host made it to the list, which is decided by viewers through a telepoll and a survey of 600 Singaporeans.
Rather, they were stunned by who did not make it this year: Best Actress Ivy Lee – out. Former Star Search champion Jacelyn Tay – out. Much talked-about new face Joanne Peh – out.
Instead, the night belonged to Felicia Chin, Fiona Xie, Jeanette Aw, Jesseca Liu and Rui En.

These newer faces took their place on stage with veterans like Quan, Kym Ng, Huang Biren, Xiang Yun and Michelle Chia in the Top 10 category.

Could the five girls usher in a new era of TV actresses? Pretty, talented and all under 28, they are already being talked about as The Next Big Things to come out of Caldecott Hill.
Could one of them emerge to reach the heights of popularity that Tay and Fann have?
The five are not exactly new faces. But, sometimes, it takes time before an actress registers in the public consciousness and is catapulted to the next level of fame.

There were brave smiles and sunken hearts, but thankfully no tears as hot faves were left in the cold at last night’s awards. WENDY TEO, HO LIAN-YI and YEOH WEE TECK report