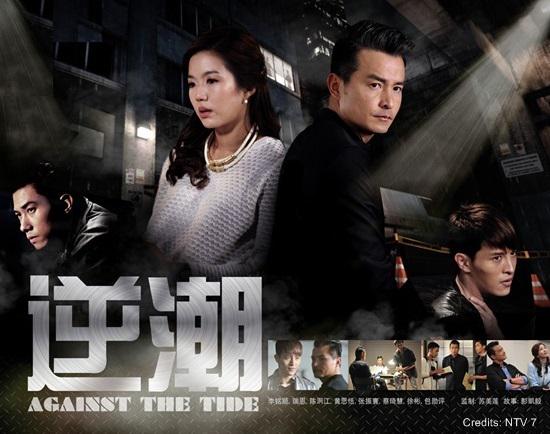 Categorised in Against The Tide 逆潮, NTV7.

The Dream Makers 志在四方 will air on NTV7, 20 Nov, 930pm from Monday to Thursday.

Categorised in EN, NTV7, On The Fringe 边缘父子, The Star.

Less is more – that was the approach taken by Singapore’s MediaCorp stars Tay Ping Hui, Chen Liping, Elvin Ng and Rebecca Lim, when they were in Kuala Lumpur recently, along with Malaysian actor Wee Kheng Ming, to promote their drama series Unriddle 2.

Viewers in Singapore knew the twists of the show, however, as the 20-episode drama was shown there in March. It will be aired here on Ntv7 starting today.

Here’s the skinny on the show: It is a follow-up to the popular 2010 crime thriller series starring Chen and fellow MediaCorp actress Rui En as an unlikely duo who team up to unravel a string of mysterious cases.

It’s not easy for Tay filming the death scene.

“My character dies very tragically. It was such an emotional scene and this woman here,” he said, pointing at his affable co-star Chen, and continued: “She started laughing and she just went on and on!

“You know she has an infectious laugh, right? So Rui En also started laughing, too. I was lying there and it got to an extent that I was like ‘I don’t want to die already!’,” said Tay with mock frustration, with Chen, 46, laughing loudly by his side.

They sounded cheerful when they recalled the episode, but the shooting process was anything but. Due to the dark tone and heavy subject matters, Rui En was said to have been depressed at one point struggling to get out of her character.

It’s not just the main characters that would make viewers hold on to their seats. Newcomers to the series, namely Rebecca Lim and Elvin Ng, also made an impression.

In what she described as her most challenging role in a Chinese drama series, Lim plays Xiao Man’s junior in the university, a psychiatrist who plays a pivotal role in advancing the plot.

Different from his usual boy-next-door roles, Ng, 31, starts appearing in the eighth episode as Xiao Man’s colleague, a cocky cop who is nicknamed Lang (wolf).

Like other characters, he’s walking the fine line between good and evil, said Ng.

“He seems to have a love-hate relationship with Xiao Man. You’ll never find out his true agendas until the very end. It’s intriguing to watch,” said the actor.

Unriddle 2 – This gritty police drama is apparently so popular that it became the very first Singapore TV series to trend in Singapore on Twitter hours before the telecast of its pilot. Picking up from where the hit 2010 drama Unriddle left off, Unriddle 2 traces the lives of crime-fighting duo Lin Zheng Yi and Hu Xiao Man, who work together in the Criminal Investigation Department to solve a variety of perplexing cases.

After the much loved drama “Injustice”, we’re keeping the adrenaline rush with a crime investigation drama “Unriddle”!

On board “Unriddle” is 2010 Singapore Entertainment Awards’ Most Popular TV Actress Rui En, and the all new edgy looking Chen Li Ping. Alongside these leading ladies are the charming actors Tay Ping Hui, Zheng Ge Ping, Rayson Tan and more, making the series all the more interesting to watch.

Rui En plays a serious, no-nonsense police detective called Xiaoman, who heads a police team of her own. While uncovering a case a human trafficking, she recognizes one of the suspects as Zhengyi (played by Chen Li Ping), but is unable to bring her to justice. Little did Xiaoman know that Zhengyi is actually an undercover policewoman, placed in the gang of human traffickers by fellow police detective Yuze (Tay Ping Hui).

As Xiaoman slowly delves into homicides, identity theft and missing peoples cases, she soon realizes that all these cases lead to an unsolved mystery dating back to 15 years. The unlikely pair Xiaoman and Zhengyi team up to unriddle the case involving Yuze, who seems to be the prime suspect of it all.

Garnering high ratings from Singapore viewers, “Unriddle” will be premiering in Malaysiafor the first time on 5th October 2010. The series will be aired every Monday to Thursday at 10pm!

p/s: Rui En was said to have done the stunts on her own until her injury from one of the filmed scenes prohibited her from doing so. Chen Li Ping also manages to break away from her old image and does a great job playing the tough cookie Zhengyi.