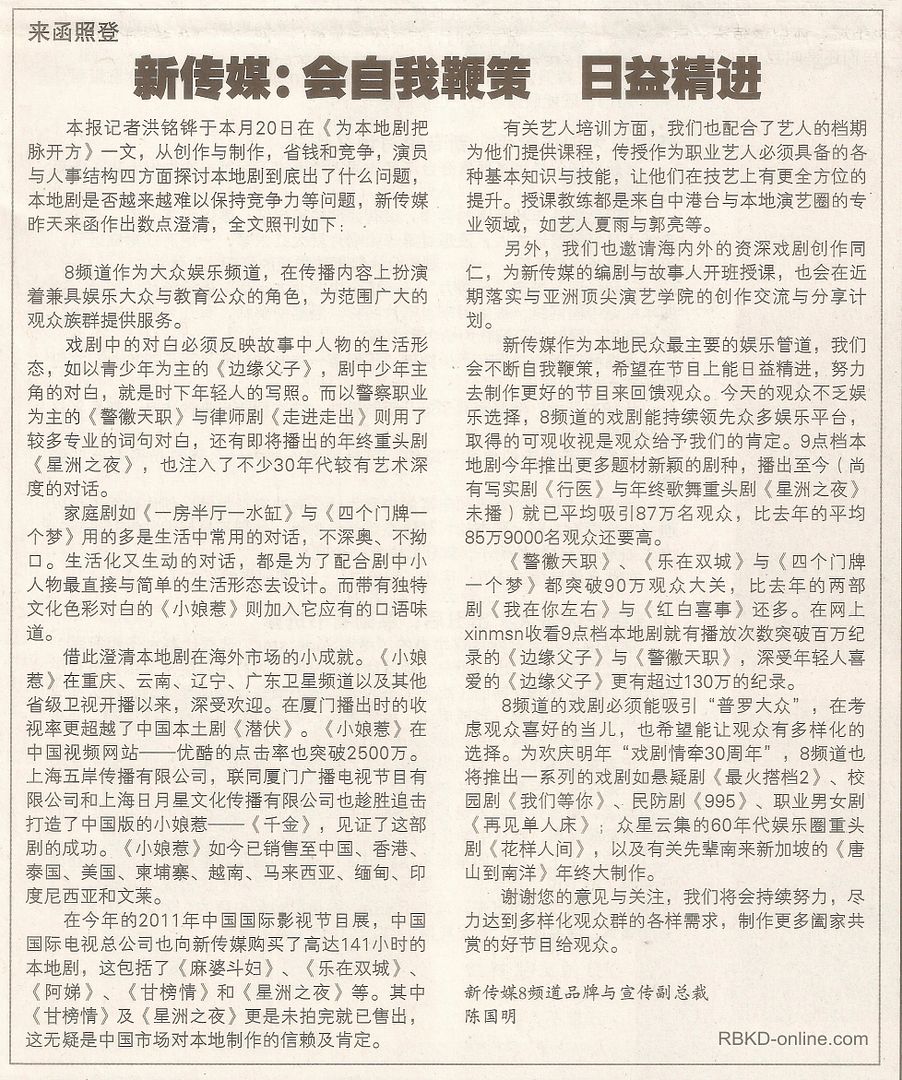 During its run on MediaCorp’s Channel 8 the past four weeks, much has been discussed about Love Thy Neighbour’s scripted dialogue and representation of locals and foreigners. Despite the wide discussion on the drama, the show has been attracting a steady stream of viewers, even surpassing the one-million viewership mark on Oct 13.

According to Paul Chan, vice-president of MediaCorp Channel 8 Branding & Promotions, viewership rating for Love Thy Neighbour has already surpassed the 900,000 mark — even before the series ends concludes on Monday. It joins the ranks of police drama series C.L.I.F, and A Tale of Two Cities starring Rui En and Joanne Peh, which are the other two dramas which have successfully attracted an average of more than 900,000 viewers during its run.

Thanks to a wide variety of drama genres this year, before the year concludes with two more shows — The Oath and A Song to Remember — 2011’s dramas on Channel 8 have attracted an average of 870,000 viewers to date, which shows an increase in viewership, as compared to 2010’s average of 859,000 viewers.

These dramas are also attracting online viewers on xinmsn’s Catch-Up TV. Popular youth drama On The Fringe, which, tackled delinquency issues and the rise of youth gangs, was most popular online attracting more than 1.3 million views during its run.

Ongoing series Love Thy Neighbour has sparked a wave of criticism against local Mandarin TV dramas.

Channel 8 drama Love Thy Neighbour has not been feeling the love. In recent weeks, it has been the lightning rod for all kinds of criticism directed at locally produced contemporary dramas. Viewers have taken issue with the show’s lack of subtlety and poorly written dialogue, among other things.

Last week, one of them, Mr Lee Yi Shyan, questioned in a Facebook post the need for characters to shout or scream in order to express themselves.

Mr Lee, who is also Minister of State for Trade and Industry and National Development, tells Life!:”It was not just a particular episode that I based my comments on, but over a period of time. I find that Chinese local drama production has a lot of conversations that feature raised voices, a bit of screaming and shouting to express anger or frustration.”

“Of course human emotions are complex and there will be moments when you will be really angry. But I think in a good drama, everything should be in proportion – you have some gentle, soft moments and then the emotional moments and so on.”

Lianhe Zaobao senior correspondent Ang Ming Hwa agrees, saying that frequent arguments in a drama have become “the focus of the show” over the years. “It becomes a habit they find hard to break. They think that with loud voices, they will catch the audience’s attention but they actually lack creativity,” he adds.

In response, Mr Paul Chan, vice-president of MediaCorp Channel 8 Branding & Promotions says:”For each drama, the dialogue is specially crafted and relates strongly to the social status of the characters, the genre and era. For instance, in a youth drama such as On The Fringe, the teen characters would have more youth-speak dialogue. If we do not capture the essence of the different characters or genres in each drama, we would not be reflecting reality.”

Civil Servant S.L.Leong, 43, has been turned off by Channel 8 dramas because of the quarrelling scenes, which she says happen “most of the time”. She now prefers to watch Channel U’s local productions, some of which are made outside of MediaCorp.

She likes the more “wholesome themes” of shows such as Secret Garden (2010), which looks at psychological problems.

In contrast, she says Channel 8’s recent youth-oriented drama On The Fringe glamorised teen gangs. She adds:”I thought it was a negative portrayal of youngsters, even though the ending was good.”

Assistant Professor Liew Kai Khiun of Nanyang Technological University’s Wee Kim Wee School of Communication and Information says the problems he has observed in recent Channel 8 dramas have to do with “little imagination, inspiration and realism in the plot of grumbling parochial and unconvincing characters.”

“I am not convinced that the audience would be pleased with the frequent pretexts for explicitly explaining government policies and the reminders on how fortunate Singaporeans are in receiving handouts.”

This trend of poorly written scripts with propaganda-like dialogue was also seen in shows such as police drama C.L.I.F., which aired in the middle of this year, says student Hubert Wah, 23.

“The police would be introduced into the scenes mid-way, which made part of the show seem like a corporate video or propaganda. It was so fake to me.”

Categorised in Dramas - General, EN, On The Fringe 边缘父子, The Straits Times.