But the star element was introduced only in 1998, when Kit Chan became the first local singer to sing Dick Lee’s heartwarming tune, Home.

But nothing approaches the glory of performing in front of a 60,000-strong crowd celebrating the nation’s birthday.

Here’s a look at who has done the honours:

1999: Together by Evelyn Tan & Dreamz FM. The music video was shot by famed Hong Kong director Tsui Hark who captured our multi-racial harmony.

2001: Where I Belong, composed and performed by Tanya Chua.

I AM not sure why Channel 8 chose to brand Love @ 0 deg C as an idol drama.

It’s quite a gross injustice to their own product, I must say.

Especially since idol dramas now have such a bad rep for having mindless fluff and terrible acting – in particular those from a certain Asian country that churns them out by the dozen.

Love @ 0 deg C stars Rui En as Yixin, a fashion design student so poor, she cannot even afford her own creations.

She and sidekick Xiaoling (Felicia Chin) harbour dreams of marrying a rich man and enjoying a life of happily-ever-after.

While at a posh party to snag a rich husband, Yixin keeps crossing swords with arrogant playboy Guobin (Julian Hee), who ends up being her boss when he hires her as a cleaner for his new dessert shop.

When Guobin breaks up with his wilful girlfriend Qiao Anna (Michelle Saram), Yixin cheers him up and they fall in love.

But when Anna is blinded in an accident, Guobin decides it’s his duty to take care of her.

Love @ 0 deg C may be based on a formula targeted at the teen market.

But what makes the show bearable is that it doesn’t play cute.

After all, you can hardly expect to get away with it when your cast has a median age of 25.

Instead, the likeability of Love @ 0 deg C lies in the charm of its lead, Rui En.

The feistiness she injects into her character, and her unaffected performances will make you warm up to her instantly.

Categorised in Love at Zero Degrees 爱情零度C, The New Paper.

In our technicolour telly world, Michelle Saram is the girlfriend from hell while Rui En is ever the ‘rah-rah’ ambitious girl who never gives up, but they sure blew our stereotypical impressions out the window when they tackled our mushy love test! Who had pillow fights before? Who would sulk if she didn’t get her way?? 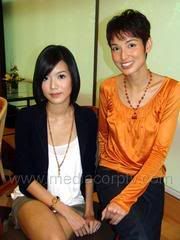 Rui En and Michelle Saram, both leading stars of Channel 8’s idol drama Love At 0° C, could not be more different than the characters they play in the drama which debuts this Monday July 10 at 9pm, especially Michelle who plays a spoilt brat named Anna.

Rui En, on the other hand, was so much more poised and composed in real life than the feisty livewires she often portrayed, like in My Mighty In-Laws, Love Concierge and A Promise for Tomorrow. Ever the sagely and practical one, she even admits she feels ‘like an old person trapped in a young person’s body’!

Yixin is a sassy, driven and positive fashion design student who never feels sorry for herself and never allows herself get down. Despite her complicated and less-than-rosy family background, she makes the best out of every situation.

Twenty-five year-old Rui En on the other hand labels herself a more negative person who has problems expressing her anger and sadness: “I’m quieter and I’m not as expressive as Yixin who’s very open about what she thinks and feels. I feel like an old person trapped in a young person’s body because I do very old people things staying at home, reading and doing quiet things like that. I don’t like to go out which is quite unlike Yixin.”

Rui En also reveals that she sometimes build walls around herself so that people doesn’t get to the point where they can irritate her. When a quarrel occurs, she’ll also be the one to walk off calmly than to continue thrashing things out.

Whew, that’s some straight and tough talking from the girls… so are they really that composed and realistic when it comes to saccharine-sweet love? Is there truly no ounce of girlish romance in them?? We gave them the love test to suss them out… The results? See for yourself!

Love interests in the drama

Hu Guobin (Julian Hee) and She Weixiang (Elvin Ng), both who takes a shining to Yixin.
“Yixin doesn’t feel any chemistry with Weixiang so she writes him off as only a friend, but he falls in love with her from the beginning. Guobin and Yixin started off hating each other but romance blossoms as they got to know each other better.”
Rui En asserted strongly that she’ll never let herself be involved in such a ‘Beverly Hills 90210’ love complication because she likes ‘jian dan ai’ (simple love)!

Ever wanted to marry a rich man? Would you date someone for money rather than love?
“When I was a teenager, yes,” Rui En revealed. “I think every girl must have wondered how it would be to marry a rich man. Now, however, I feel to sacrifice love for money would be a very sad choice. I don’t need a big house, cars or expensive things; I’d rather be happy.”

More likely to be the Dumper or the Dumpee?
“Hahah… dumper lah, ‘coz I’m the first to run mah, hahah! I tend to protect myself lah.”
Rui En especially hates break-ups where one party clings on and refuses to let go!

Thing most want to do in a romance…
“If I love him a lot, I’ll bear him children. I really look forward to being pregnant! Worried about pain? Haha but there are epidurals now!”

More likely to manja (act coy and baby-ish) or demand for what you want?
*Chuckling* “Both also won’t; I don’t like to manja, I think it’s very gross! I don’t like girls who (pretending to manja) like that… cannot, cannot. If I were the guy, I wouldn’t have affection for someone who does this to get her way. I will not demand either, because I think if you’re with somebody, you respect that person, and when you respect someone, you don’t demand that person to do anything. But I was younger, I was quite hard and demanding but I don’t think it’s right.”

Most likely to sulk, cry or storm off in a fight?
“Storm off, that’s very my pattern. I don’t like confrontations and arguments and I hate screaming sessions. I’d rather walk off calmly and flee the scene. I don’t like people to get underneath my skin and I don’t let people get to the point where they can irritate me. Yeah, to a certain extent, I build a wall around myself but I think with time, that wall kind of disappears.”

Love turns you into a little kitten or your nagging mum?
“True love, the correct kind of love, lets me remain myself. I believe if love makes you change, or if you feel the need to change to please the other party, then that’s not really true love.”

Pillow fights – pure bliss or downright corny?
“Corny, very corny! Yeah, I did it when I was a little girl at slumber parties. It’s very funny: when you read these American books and you watch the American shows, it seems that pillow fights are THE thing to do at slumber parties, hahah! So once when I was younger, my friends and I had a sleepover and we did it lah. But it’s so stupid, ‘coz in the shows, the pillows always burst and the feathers come out – that never happens in real life. *Laughing uncontrollably* Now, I think it’s so childish! Plus it’s dangerous! What if you knock something over?”

Tattoo your lover’s name on your body or carry a vial of his blood, all a la goddes
s Angelina Jolie “Never… never! Oh my god, I think that’s like the sort of things younger kids will do.”

A staunch believer in the holy institution of marriage or ‘while the good times last’?
“Staunch believer in marriage. I think everyone should take it seriously and I don’t believe in the trend where ‘oh, never mind, can divorce’. I always believe that things should be permanent and not temporary, and marriage is the highest on the list of things that should be permanent.” 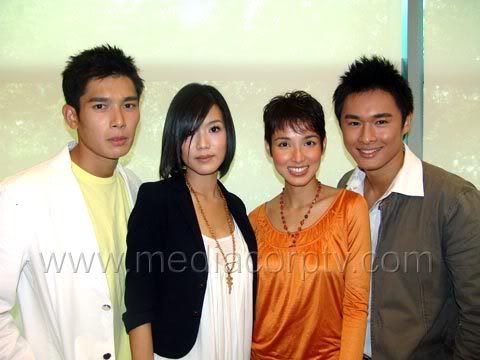 The pretty actress may not look it, but ‘an old woman’ was how she described herself recently.

Speaking at the Love @ 0 deg C press conference, Rui En said she is unlike the sporty character she usually plays in dramas.

‘I am like an old woman, I like to stay at home to read, or go on the Net. I hardly go out, because I don’t have that many friends. I have only a few close ones. Maybe because I’m an only child, I’m happy with my own company most of the time.’

Her idea of unwinding is to go for long drives.

But the good news is, Rui En is not into looks: ‘I don’t like good lookers, I am not into having a trophy boyfriend by my side.’

So, were her previous boyfriends ugly? Rui En said: ‘I’m not answering that question!’

Categorised in Love at Zero Degrees 爱情零度C, The New Paper.